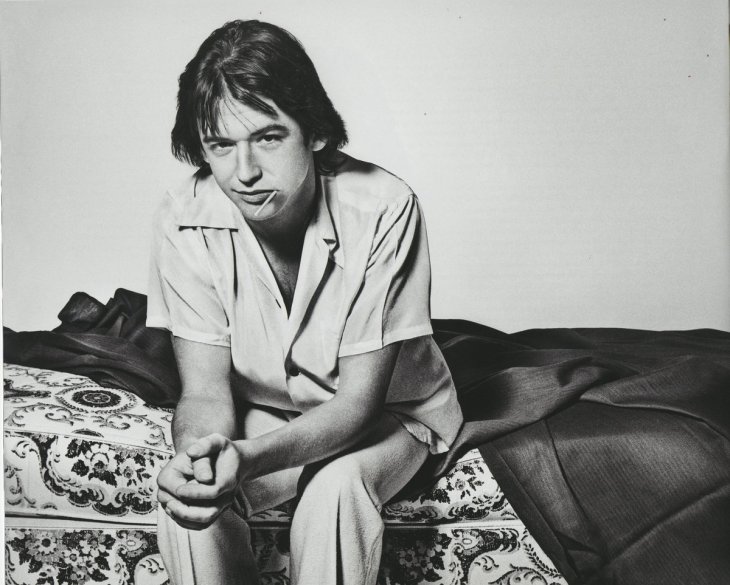 (This interview originally appeared on Wondering Sound, a site since vanished down the memory hole of the internet.)

Ned Doheny scans as a lucky man. Born into an oil tycoon fortune, the California-born singer-songwriter befriended Jackson Browne when both were teenagers and soon found himself signed to David Geffen’s newly-minted Asylum Records alongside the likes of Joni Mitchell, Laura Nyro, and the Eagles. By the mid-70s Doheny’s songs were being covered by Chaka Khan, Average White Band, and David Cassidy to name a few, yet for his own career, fame and fortune eluded him. His particularly sweet and rhythmic take on blue-eyed soul fell on deaf ears with the release of his second album, 1976’s Hard Candy, despite Boz Scaggs’ breakout success with Silk Degrees but a few months earlier. And while Doheny’s laidback work also scans as “yacht rock,” he was even looked over with that subgenre’s revival.

But Doheny has always been revered by DJs. Even as his third album Prone failed to even garner release in the US, soul-minded UK DJs made a hit out of that album’s single “To Prove My Love.” And now he’s finally getting his due with Numero Group’s overview, Separate Oceans. Wondering Sound rang up Ned Doheny one afternoon at his ranch house in Simi Valley, where he talked about the Santa Ana Winds, how being stubborn affected his fame, David Geffen’s relationship to his body, and why Lost in Translation resonated with him.

Hi Ned. Where am I reaching you right now?

I live in a ranch in Simi Valley which my family has had since I was five. The house is small but lovely. And it puts me in striking range of Oxnard and Ventura County, which is where I surf. Being a surfer, when the Santa Ana Winds come out of the desert blow off shore, it makes for good surfing. But those winds can do some serious damage inland.

You’re from a wealthy family through your grandfather, so was music an act of leisure or of rebellion?

Music was listened to constantly in my house. As a kid, you look at all that and it was obvious what they loved. By the time I was six, the fools gave me a guitar! I went through the folk period, which wasn’t a huge favorite of mine; Folk was too soft and not physical enough for me. But then surf music came along and that was part of my culture, kicking the amps for reverb and all that. Lonnie Mack took my breath away. That was the first guitarist where I thought to myself “Holy shit! I would love to be able to do that.” It wasn’t until I got into Motown and Philly Soul that I began to realize that you could be sophisticated yet still write rhythm music. I also love Hoagy Carmichael. I drank that all in. Music that could get your body and mind on the same wavelength is an almost spiritual endeavor for me.

How did you wind up meeting David Geffen?

When we were still teenagers, Jackson Browne and I were involved with a recording studio in Northern California. We all went up to this recording ranch and somehow got Jac Holzman of Elektra into funding this thing. When that crumbled in Northern California, I then came back to Los Angeles and studied classical music for a year. I learned classical guitar and went “Now what am I going to do?” My hands were really strong yet I still haven’t figured out how to integrate all this into music. So I wound up in London where I met Dave Mason. I started writing stuff for Dave Mason and Cass Elliott. I met everybody there. I met the Beatles, Eric Clapton.

When I came back from London and Dave Mason and Cass, I stayed at the Chateau Marmont and reconnected with Jackson, who was now involved with Geffen. He recommended me to David Geffen and one thing led to another and I was signed by him. But Jackson himself came perilously close to not being signed. His demo and picture were rescued from the dustbin at the office by one of the secretaries, who thought he was cute. Girls have always driven this business. Jackson got me together with David. But at Asylum, some of us were blessed and others were not.

Asylum was pretty much pointed towards people who came directly from singer-songwriters. I was really the only guy on the label who played rhythm music. Geffen enjoyed an ‘unusual’ relationship with his own body and I wasn’t speaking his language. I was the only groove guy. I was outside David’s experience. He didn’t know what to do with me.

How fickle is fame?

Oh God. It’s so silly. One true believer can make all the difference for your career. Without that believer, it’s a different business. If you’re a Buddhist, on one level it’s ordained. But on the other hand, if you’re fortunate enough to be standing in the right spot when the sun comes out, you’re in business. It’s highly speculative. But people who are successful will admit there’s a tremendous component of luck.

Did you feel unlucky?

No. I was a grumpy little prick. How did the suits describe it? “He does not take direction well.” That was my description. I was raised by down-to-earth straight shooters. The idea of the audience not meeting me halfway was grounds for divorce. I was clinging desperately to my own stuff. I had a lot of opportunities and chances are that if I had just shut up and done what they told me, we’d be having a very different conversation. But it’s been an interesting arc. I can see what I should have done differently but maybe the marriage doesn’t work, but then there’s a child. You can’t completely toss out the entire experience because there were so many other experiences connected to it. I could have been more receptive (sighs) to direction though.

Your song “Get It Up for Love” was covered by the likes of Average White Band, Tata Vega, David Cassidy, etc. When you saw people covering your work and having success, was it frustrating to release your own records and not have it come back to you?

It was a little frustrating. A lot of it is timing. I ran into Clive Davis shortly after Hard Candy came out in 1976 on Columbia and he said “Jeez, if I had known you were going to make that record I would have signed you for sure!” and I’m like “Thanks? Much appreciated.”

I first discovered “Get It Up for Love” because of a DJ comp and went “Who is this California singer-songwriter with this groove to it?”

Dance music is the most fun, I think. Other songs have poetic substance, but it’s also nice to fly about and not think. I try to split the difference. Lyrically, you can tell people dangerous things if you’re inviting them to dance. It’s a great platform to offload your treasonous thoughts. It was really funny, CBS wouldn’t even release Prone in the states, but I had a huge dance record in Britain with “To Prove My Love.” The dance contingent went nuts for that song and to this day, I have huge cred among DJs.

After Prone, you no longer had a label, but you were in the truest sense, “big in Japan.” And in listening to some Japanese artists, I can see that strain of sophisticated pop in certain Japanese singers that I have to think stems from your music.

Career-wise, in the late 70s, things were in the toilet for me. I was living in the Hollywood Hills and my girlfriend had moved out. To top it off, it rained for three months –most I had ever seen in Los Angeles– with cars coming down Laurel Canyon sideways without drivers in them. Manhole covers flying off with plumes of water and Santa Monica Boulevard in four feet of standing water. So I got a call from these people going: “You want to go play in Japan?” And I thought: “Why not?” So I jumped on a plane.

And it was so strange. The country is so beguiling. It’s like being in a cartoon. The whole country is a non sequitur. I went from absolute obscurity to being quite well-known. In Japan, the audience doesn’t say a word or make a sound, but then at the end, they would charge the stage like rhinos. We played in Osaka, and after the concert we get back to the hotel and there’s all these people in front of the hotel. I went: “Oh, there must be someone famous staying here.” But so we get out of the car and it turned out it was me! I had always laughed about Japan as it seemed to me that people who had no career went there to be resurrected. I thought about the actor Russ Tamblyn and certain actors. That’s what was so great about Lost in Translation.

I just saw 20 Feet From Stardom and one of the subjects is Tata Vega, who does a great cover of “Get It Up for Love.” In the movie, she says that had she sold a million records at that time in the 70s, she would be dead form a drug overdose. In hindsight, do you feel it was a blessing of sorts to have not had such fame?

Who knows? Maybe. When you receive that much attention, the message is, “You’re doing something right.” Sadly, the dark aspects of one’s personality are exalted right alongside the creative ones – hardly a recipe for humility and grace. The trick as I see it is to figure out how to starve your demons, not feed them. Most people don’t do well in the public eye. I have always thought that the best way to deal with fame would be to not take it personally. Mercifully, that has not been my problem.

Were you surprised when Numero Group reached out to you with this project? Did you think that people would still care about your music thirty years on?

Not really. Life has always amazed me and I draw hope from its lack of predictability. The Numero Group is a bunch of lads who love music as I do. Small wonder we should find one another. That part is a bit unexpected, but the digital revolution has accelerated our evolution exponentially. We consume and spit out information at an astounding rate; coupled with an insipid and largely formulaic music business, all that’s left is the search for buried treasure.

What was it like to revisit the demos of some of these songs? In listening back to this young version of yourself, is there something you notice now that you didn’t realize back then?

Just how lucky I was.